The Skills Development Opportunity in the Dual Economy 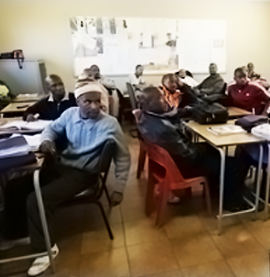 The South African economy can be described as a dual economy – we have the formal economy, often referred to as the first economy and then we have the informal economy, also known as the secondary economy. The formal economy relates to the developed economy – corporations running large businesses; employing many people and paying taxes. The informal economy is developing. It is essentially run by entrepreneurs – people who can identify a gap in the market and make a basic living from it. Should they be successful, they can also employ a few extra people. Hawkers; spaza shops; taxi drivers etc are all examples of this type of economy. This is where the growth potential of the country resides. If every potential entrepreneur could employ themselves and two others, the impact on our unemployment rate in the country would be huge! Imagine that 1 000 0000 people each look after their own financial needs and are able to employ two extra people. We would have 3 000 0000 people off the unemployment figures and off social grants – the effect is staggering, economically and socially.

Entrepreneurship is critical to the economy – this is a view supported by the government. In as early as 1995, an important milestone was achieved when government released its White Paper on national strategy for the development and promotion of small business in South Africa. It was the first time a comprehensive policy and strategy on small business development was formulated in the country.

Since then, government owned institutions and programmes have evolved. These included:

“The promotion of entrepreneurship and small business remains an important priority of the government of South Africa. Our commitment is to ensure that small businesses progressively increase their contribution growth and performance of the South African economy in critical areas such as job creation, equity and access to markets.” Mandisi Mpahlwa, MP: Minister of Trade and Industry 2009

The mantra of “study hard so that you can find a good job,” needs to be replaced with “study hard so that you can create your own job”. Redesigning programmes in entrepreneurship can go a long way in teaching adults self – employment strategies. Studies have shown that graduates are three times more likely to start their own businesses and be self-employed. This is the reason why so many universities include basic business economics as part of their curriculum. Several NGOs have been implementing curricular and non-curricular enterprise education programmes over many years, in various parts of the country. These include the South African Institute of Entrepreneurship, Junior Achievement Southern Africa, the Foundation for Enterprise & Business Development, Education with Enterprise Trust, Entrepreneurs on the Move, and, most recently, Mindset. Some major banks sponsor financial-literacy programmes, mostly targeting high-school learners.

We need to let this cascade down to AET as well. By reinforcing entrepreneurship training and SMME training, we are ensuring that our adults understand that the ultimate goal of their training is to ensure that they understand that job security does not lie with them working for someone else, nor the state. Companies close down; resize; retrench as do state departments. If you want to feel financially secure, the responsibility lies with the individual – make your own job and have security.

As part of their sectoral skills-development mandates, various sector education and training authorities (SETAs) have developed and are implementing small business skills-development programmes. Some of the SETAs are also implementing the New Venture Creation Learnership, with the aim of enabling the participating learners to learn the skills and receive the support necessary to start and successfully manage their own businesses.

Private sector support initiatives, several South African companies have heeded the call for private-sector participation in small business development, and have responded by implementing a variety of initiatives. Virgin; Nedbank; The South African Institute for Entrepreneurship (SAIE) is driven by a vision of a dynamic culture of entrepreneurship in South Africa that promotes a positive mindset in youth and adults and assists in the eradication of poverty through the creation of effective entrepreneurs.

As part of maintaining their mineral licenses, through the Department of Minerals, all registered mines need to partake in CSI initiatives. In the past, these initiatives may have been viewed as a “by the way thing” – one of the many criteria with which they needed to comply, in order to maintain their license to mine. This is no longer the case. With all the modifications that have happened to change the mining landscape, the resulting community unhappiness; the high levels of retrenchment and unemployment, CSI is a must do – use the opportunity to benefit the environment around the mine – the surrounding community. What can they do to help the community with their vast numbers of unemployment and poverty? AET is one of the solutions – training and development. What kind of training? We must enable people to help themselves – entrepreneurship training.

Media Works has such a course, specifically designed to teach people how to become self employed – create their own financial security. In turn the community will prosper, an economically success community means a happy community – less strikes; less social evils such as crime; rape; abandonment and substance abuse.