Esther Makoloane, Facilitator of the Month 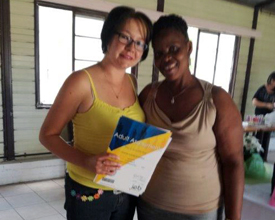 Esther Makoloane joined PPC at Lime Acres as a Media Works AET facilitator in 2010. Her learners are varied and include mine employees, mine contractors and community members.

I decided to become a Media Works facilitator so that I could help adults who, due to different circumstances, were deprived of getting basic education during their teenage years. To give them equal opportunities of being promoted to higher positions within their companies.

I grew up in a family of 7 children. My parents were unemployed with very little education. With the help of my brothers, who were earning very little due to lack of qualifications, I managed to complete my Matric in 1985. I never gave up, I did a short course with Operation Upgrade for Adult Literacy teachers in 1992, and later trained as a Trainer of Trainers at Learn & Teach Adult Literacy Organisation in 1993. I achieved Adult Educators Certificate in 1998 & Higher Diploma through distance learning with the University of the Western Cape in the year 2002. I am also an accredited assessor and a Media Works FLC Facilitator for Mathematical Literacy.

My first job as an Adult Educator was at my village Losasaneng, employed by Helen Joseph Women Development Centre (Non-Governmental Organisation) in Kimberley in 1992. I went door to door and recruited 12 people who were between the ages fo 20 and 55. At first they were asking me if they will be able to learn something because they were old, but after explaining that one is never too old to learner they agreed. I used my late brother’s two roomed house as a class and a box as my chalk board. Fortunately we were selling chicken portions at home so I always had plenty of boxes. The only thing that was available was learners reading books and my teaching charts from my Operation Upgrade Adult Literacy course. My learners were totally illiterate but within three months they wrote their first external exam in mother tongue, and they all passed. They could read their bibles and short stories in their mother tongue, which was unbelievable to them. They never thought that one day they will be able to read. One day in 1992 they were invited at Kimberley to meet with our late president Nelson Mandela, who shook hands with them and congratulated them for a good step they have taken at their age. My Director was the late Mrs Mitta Seperepere and I was earning R200 per month but I was happy because I could share knowledge with disadvantaged community members, and they were also happy. In 1993 I moved within the organisation to work as a trainer and fieldworker for Helen Joseph Women Development Centre.

My clients are varied and consist of PPC LTD employees, its contractors and community members who are above the age of 18, as a result their availability to attend classes differ. My day is always hectic because I am the only facilitator in the company facilitating from AET Level 1 to 4, in both Mathematical and English Literacy.

My day starts as early as 05h00 every day because I have to start my lessons at 07h00 at the community training centre where I facilitate for employees and contractors working on the afternoon shift. From 09h00 to 14h00 I attend to PPC employees who attend classes during work hours. Then from 15h00 until 19h00 I am busy with community members, contractors and PPC employees who work the morning and night shifts. I do this for 3 days per week and then become busy with administration on Thursday and Friday. When I am able to, I offer lessons to those who are behind with their work for 2 hours on Saturdays and Sunday. I always go the extra mile because the pace at which learners progress is never the same, and it is my duty to ensure that slow learners also achieve. It’s tough but at the end of the day I smile when the results are good.

The best part of my work is that I not only help learners, but I get to learn from them too. When learners struggle to solve a mathematical problem, I use different strategies and guiding examples to help them. This helps me to develop as a facilitator. I also enjoy it when a learner challenges an idea and gets class to discuss the point. When a discussion like this starts I move away from them for few minutes to allow them to come up with their own solutions, I generally find that when I return they have reached an agreement and they will now be happy and laughing again.

There are a number of learners who made an impact in my life, but I would specifically like to mention Dan Motshabi who was totally illiterate when he first started coming to AET classes. He worked at the Rex Diamond Mine in 2002. He could only write his name because somebody showed him how to write it even though he didn’t know what all those letters were. He is now building a company that will recycle oil and supply it to other companies as clean oil and diesel in the area of Smiths Drift, Kimberley and Kuruman. He is in fact the founder member and Chairperson of the company, and is able to debate and communicate with confidence in the queen’s language with top business men.

To be an AET Facilitator is not only about the classroom and books, but to change lives of adults positively as member of society. One needs to be patient, flexible and hard working. Sometimes you are faced with a situation where you have to counsel learners with personal problems so that their learning is not disturbed. All Facilitators need to be committed and not be cheque collectors. We need to place learners and their learning first.