Learner of the Month – David Mainama 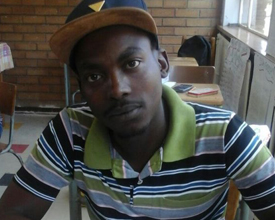 As part of a community upliftment project run by De Beers Voorspoed Mine, David Mainama was given the opportunity to complete the Media Works Access (FLC) course, which provides learners with occupational training, industry learnership and skills development.

The course was presented at the Kroonstad High School Agricultural Centre in Kroonstad. In total there were 22 learners who participated in the course, of which 10 were community learners and 12 were De Beers employees.

This was a great opportunity for unemployed learners, like David, as those who excelled in the course would be invited to apply for a learnership offered by the mine. The course started in August 2016 and ran for four months.

Growing up in Vredefort, in the Free State, David attended Boiphihlelo Secondary School and completed his Matric in 2013. David jumped at the opportunity to enroll in the course, because it was the first chance he had to further his education since matriculating. He also recognised that by developing his skills, he would be more marketable to companies in a variety of industries.

While David learnt a lot throughout the duration of the course, he was most impressed with the range of different skills that the course covered.

“I would advise anyone who has not been on this FLC training to go for it, because plenty of skills are provided. We learnt budgeting skills, which are very useful for everyday living, and we also learnt how to speak more eloquently using correct punctuation, which I found useful,” said David.

David has been able to apply his skills practically already; “I learned how education from the classroom can be applied to the work environment. For example, the length of a ladder needed to complete a task can be calculated using Pythagoras theorem. I have also learnt how to put a budget together, which benefits my family too.”

David feels that he can more confidently engage in a work environment with his newfound skills; “I can speak English articulately with my colleagues and future superiors.”

David was thrilled with his results, as he achieved 85% for Mathematics and 75%for English. He is hoping this is the springboard he needs to be accepted into a possible learnership with De Beers Voorspoed Mine.

The future looks bright and David is excited about what it holds for him; “This training program is the best because it prepares anyone to be employable in any industry across the world.”