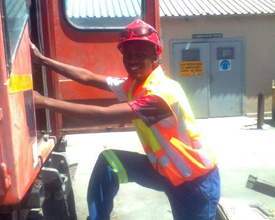 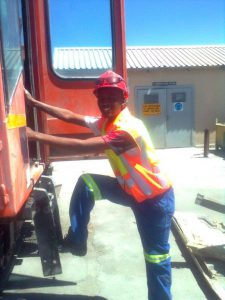 My name is Samuel Oduetse Moagi and I am 38 years old. I am originally from a small village in the Kalahari District in Kuruman. I completed Grade 12 in 1998 and could not fulfil my studies further because my parents were poor, but I grew up with a dream of becoming an Electrical Engineer one day.

I was appointed by PPC Pty (Ltd) in 2008 in Lime Acres as an Operator Support, which is the lowest grade position in this company. My intention was not to remain at this position for good.

I approached our Human Resources Manager for advice, because I never gave up on my dream of becoming an Electrical Engineer. He encouraged me to start attending the Media Works Adult Education Training (AET) classes so that I can improve my mathematical and communication literacy. Honestly, I was very reluctant to enrol as I was one of many people who were undermining AET at work, thinking that it is for illiterate people.

In 2010 I decided to take the leap and signed the enrollment forms just to see how this programme could help me. To my surprise, I realised the importance of AET, because I learnt many things that I didn’t learn when I was in Matric. I became so happy and inspired to work hard, and I completed both Literacy and Mathematical Literacy NQF Level 1 with Higher Credit.

After completing AET Level 4, I was like a well-oiled machine because I didn’t want to stop learning. AET has laid a strong and good foundation that has enabled me to study further. I enrolled with the Northern Cape FET College in Kimberly and completed N1, N2 and N3 in Electrical Trade.

I completed these courses without failing even one subject, and largely I believe that it’s because of the good foundation that the maths AET courses provided me. I am currently an Electrical Trainee in the company only because AET opened the door to greener pastures and helped me to fulfil my dream.

In conclusion to my story, my advice to anyone who is reluctant to complete his AET Levels is to attend AET Classes without any doubt. Make AET a stepping stone to greater heights; without it I would not be where I am today.